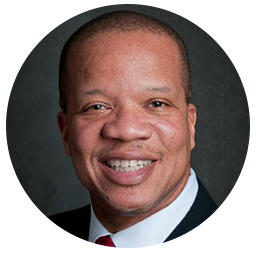 A native of Cleveland, OH, Daniels grew up in Decatur, GA and brings 30 plus years’ professional experience to Citizens Trust Bank (CTB) along with strong business relationships and community knowledge. After earning an Academic Scholarship and completing undergraduate studies at the University of Virginia (UVA), his career path was launched upon entering a management training program with First Atlanta (now Wells Fargo) and working as a Credit Analyst, Credit Manager and Commercial Lender.

Daniels employment at Citizens Trust Bank (CTB) has been lined with success in several capacities including significant operational and lending roles where he closed the largest transaction in the Bank’s history while partnering with financial institutions nationwide and equating to record loan production. He has twice been awarded CTB’s Presidential Award leading up to his current position as Executive Vice President & Chief Credit Officer. Under his leadership, CTB has been recognized as a Top 10% Quartile US Community Bank in Asset Quality. He is also charged with managing Information Security, assuring that the Bank’s cyber-security, vendor management and disaster recovery protocols are adequate and secure.

An advocate for economic empowerment, Daniels consistently gives back to the community. He has been elected by his peers to serve in numerous leadership roles, where his governance was instrumental in the turnaround and strengthening of several organizations. They include:

Daniels was named the APTA 2018 Outstanding Board Member of the Year at the annual conference in Nashville, TN. One of the highest honors bestowed by the national transit organization. In addition, he was named a 2018 Transit Trailblazer by the Conference of Minority Transit Officials (COMPTO) - Atlanta Chapter.

Daniels has been elected as a Chairman of the Risk Management Association, (RMA) Community Bank Council Member and is the Chairman of the National Bankers Association Senior Lender Committee. Daniels is a Graduate of Leadership DeKalb and Leadership Georgia, where he served on their Board of Trustee's and received their Frederick B. Kerr Leadership Award. He has been named a Man of Influence by the Atlanta Business League and a Man of Distinction by the Atlanta Tribune Magazine.