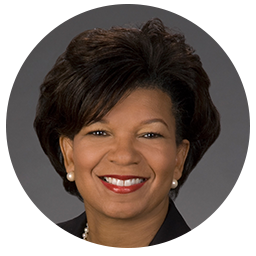 Grace is a successful financial services business leader with a record of building and leading winning teams. In September 2020, Grace joined Regions Bank as the Private Wealth Management Banking Products and Development Manager. Recently, she served the community and 801 young adults as the Executive Director of Year Up Greater Atlanta which provides low income young adults with skills, experience and support that will empower them to reach their potential through professional careers and higher education.

Grace served as the Chief Operating and Strategy Officer for Raymond James Bank where she headed wholesale loan and deposit operations, bank strategy, enterprise risk management, cybersecurity, and technology initiatives. She was also the point of contact for the banking regulators.

Prior to SunTrust Bank, Grace had 12 years of leadership roles at Wells Fargo Bank. As Wealth Management South Regional Managing Director, she integrated the merger and drove operational excellence in 12 markets. Prior to that, she was a Senior Vice President, Credit Manager where she held the highest loan approval in the State at $75 million. She also served as a Vice President Corporate Banking Underwriter and a Human Resources Consultant.

Grace is an active participant in the Atlanta civic and charitable communities. She is an accomplished public speaker and has spoken in front of various civic, industry and charitable organizations.