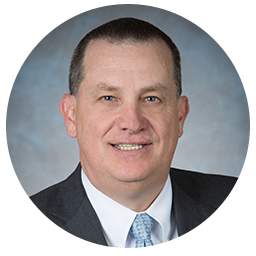 Mr. Ross joined Woodforest National Bank in 2016 in The Woodlands (Houston) as Chief Credit Officer where he is responsible for effective, sound, and consistent underwriting and management within the bank’s loan portfolio and the achievement of business goals related to loans and deposits, fee growth, profitability, client retention, and credit quality. Tony leads commercial, small business, and consumer underwriting, credit risk, real estate risk, loan review, and credit policy. He serves on many of the bank’s committees including credit, ALCO, compliance, BSA, IT, and business continuity. Tony is also a past Chairman of the Risk Management Association (RMA) Gulf Coast Chapter, past President of RMA’s Texas Chapter, and is RMA-Credit Risk Certified. Additionally, Mr. Ross served on the faculty of the Consumer Bankers Association Executive Banking School.

Prior to joining Woodforest, Tony was Executive Vice President and Senior Credit Officer for Iberiabank where he was responsible for reviewing and approving loans to Texas corporate, commercial and commercial real estate, healthcare, private banking, oil and gas exploration & production, and energy service businesses along with maintaining overall portfolio quality.

During his career, Mr. Ross has served in Credit Officer roles for Capital One, Wachovia, Regions, and Washington Mutual where he was responsible for reviewing and approving loans to corporate, commercial, energy service, and oil and gas  businesses along with maintaining overall portfolio quality.

A native of Houston, Texas, Tony was graduated from Washington & Lee University in 1983 with a B.S. in Geology and received his M.B.A. with honors from the Crummer Graduate School of Business at Rollins College in 1988. He is married to the former Janet Lee Bragin of Clearwater, Florida. Tony and Janet along with their daughter, Tova (age 18), and son, Avi (age 15), reside in the Memorial area where they enjoy golf, tennis, and fine wine.