The ratio peaked in 2Q2020 for all but two of the seven banks. Furthermore, JPMorgan and Citigroup had the fastest drop in the ratio since they also had the biggest increase from “Day 1 CECL” to 2Q2020.

These seven banks continue maintaining an excess level of loan loss reserves relative to pre-pandemic, i.e. “Day 1 CECL”. In fact, Wells Fargo, PNC and Citigroup are the top 3 banks with such excess reserves in this group.

Figures 2 and 3 depict two allowance ratios for the “>$250B” and “$10B-250B” bank groups from the Call Reports as of Q1 2021: Loss Allowance to Loans and Loss Allowance to Noncurrent Loans (Coverage ratio). The two bank groups have had highly correlated allowance ratios since Q1 2020, the start of the CECL adoption. On the other hand, the two ratios in the smaller bank groups do not seem to have peaked yet. The banks in these groups are currently reserving under the Incurred Loss model (ILM) and are expected to adopt CECL by January 1 2023.

These observations are consistent with our recent RMA journal article, where we provided evidence that: (i) the adoption of CECL has decreased the allowance variation amongst banks and (ii) CECL allowance is less procyclical than ILM. 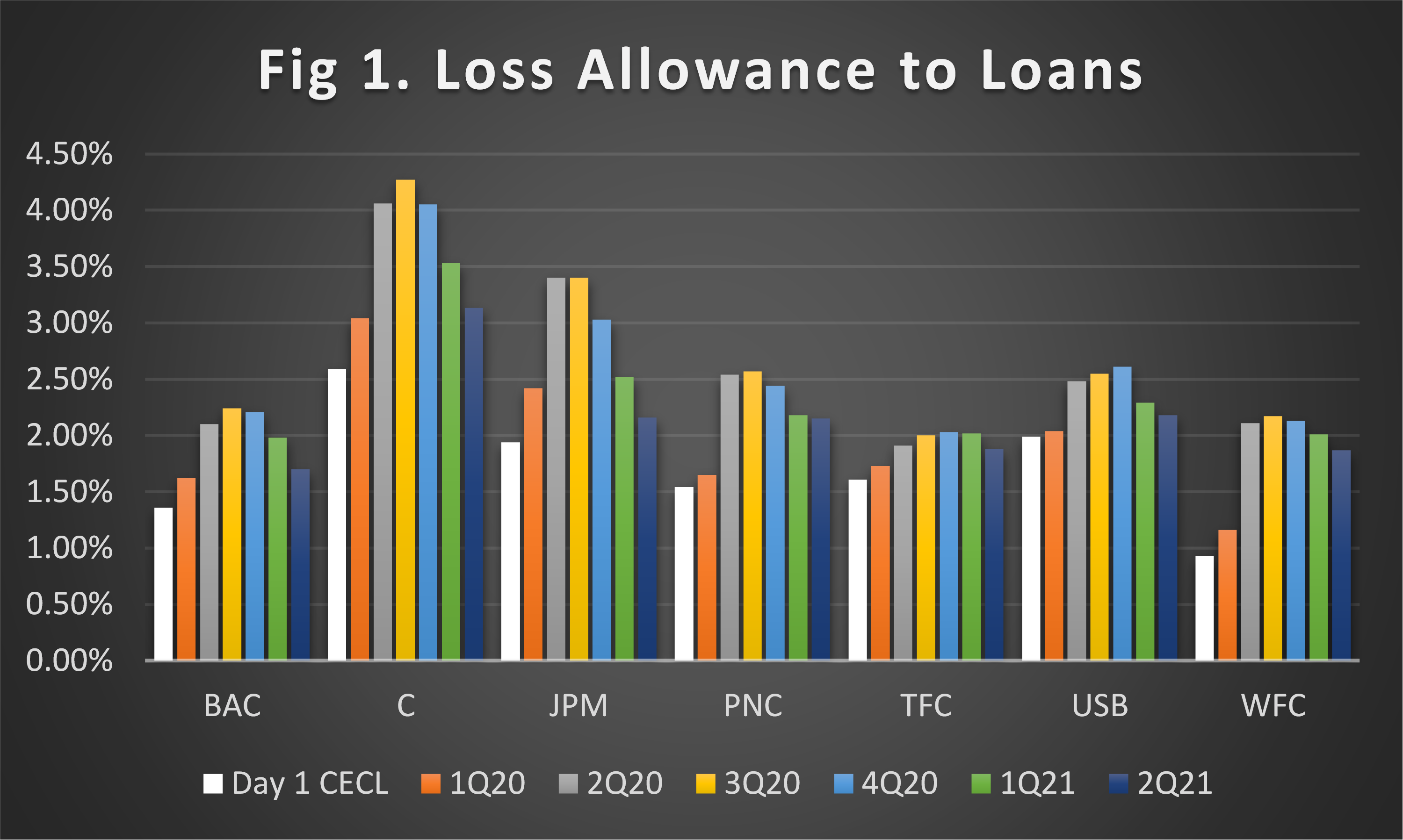 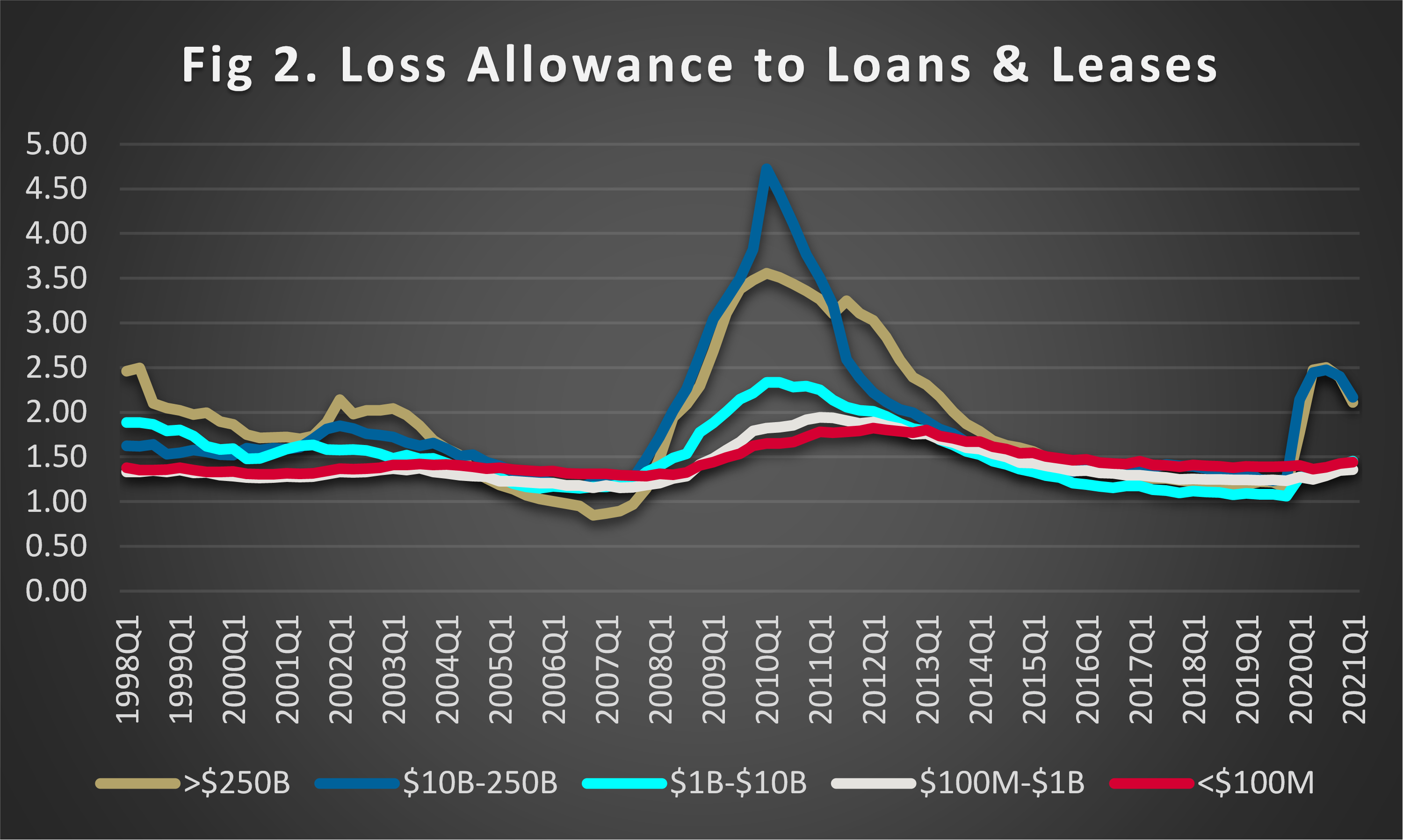 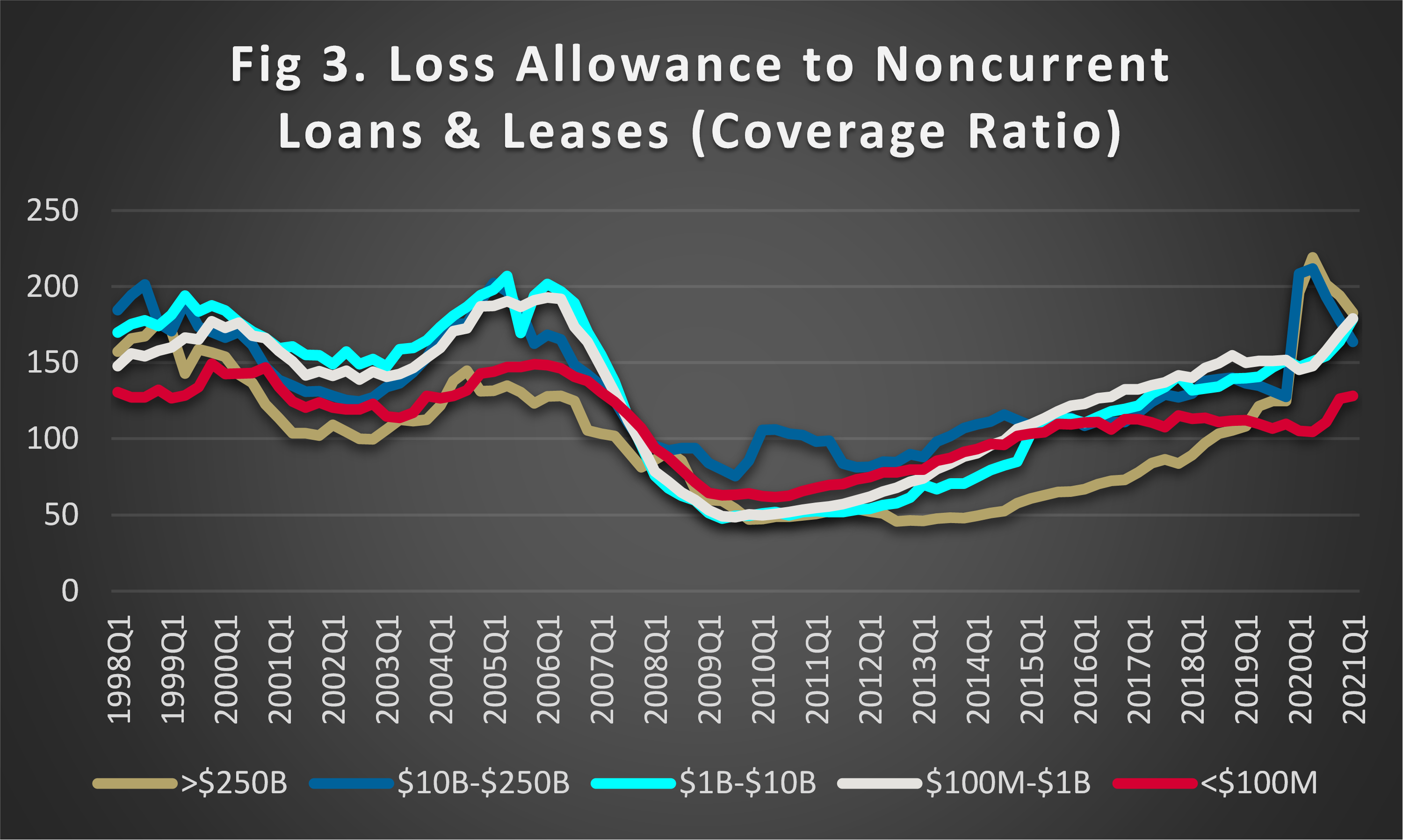 The other story in the earnings reports of the largest banks has been the negative growth of loans. To further analyze this we examined the data in the Federal Reserve System’s H.8 release as of July 16.

Figures 4-6 depict the balances of Residential Mortgages, C&I and CRE Loans for Large and Small domestically chartered commercial banks. Large banks are defined as the top 25 domestically chartered commercial banks ranked by size. The figures show that in the large banks the holdings of the above three asset classes have been in decline since the start of the pandemic. This is in contrast to the small banks that have experienced positive growth in all three segments.

Thus, Figure 7 depicts the growth in the above three segments for the two bank groups. It also includes a decomposition of CRE into Construction, Farmland, Multi-Family and Non-Residential. It is worth noting that the Large banks had negative growth across the three loan segments. The Large banks did not take advantage of the robust residential mortgage market of the last 12 months. In CRE, the Large banks only had positive growth in Construction and Multi-Family. On the other hand, Small banks had positive growth across the board and double digit growth in C&I loans mainly due to PPP. 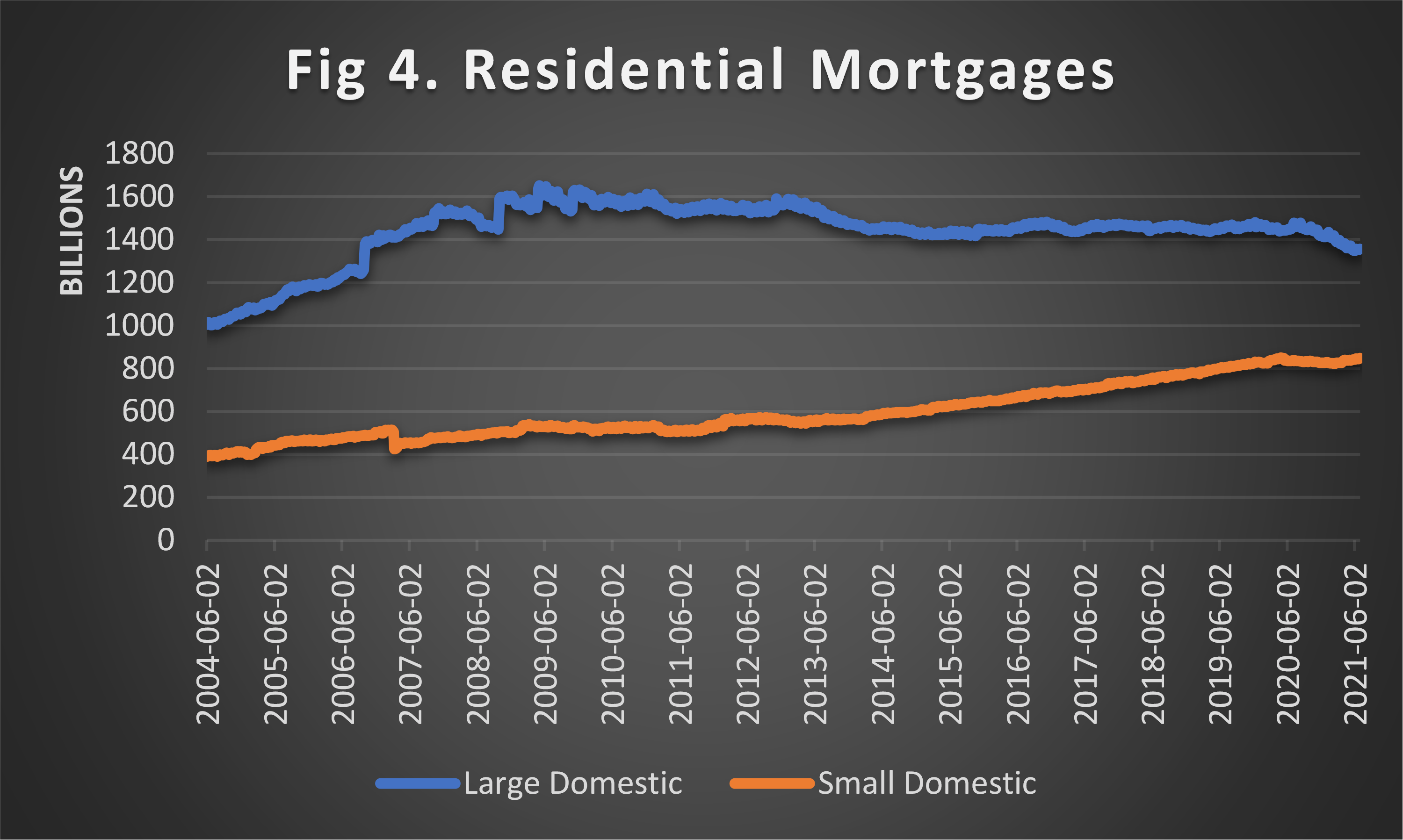 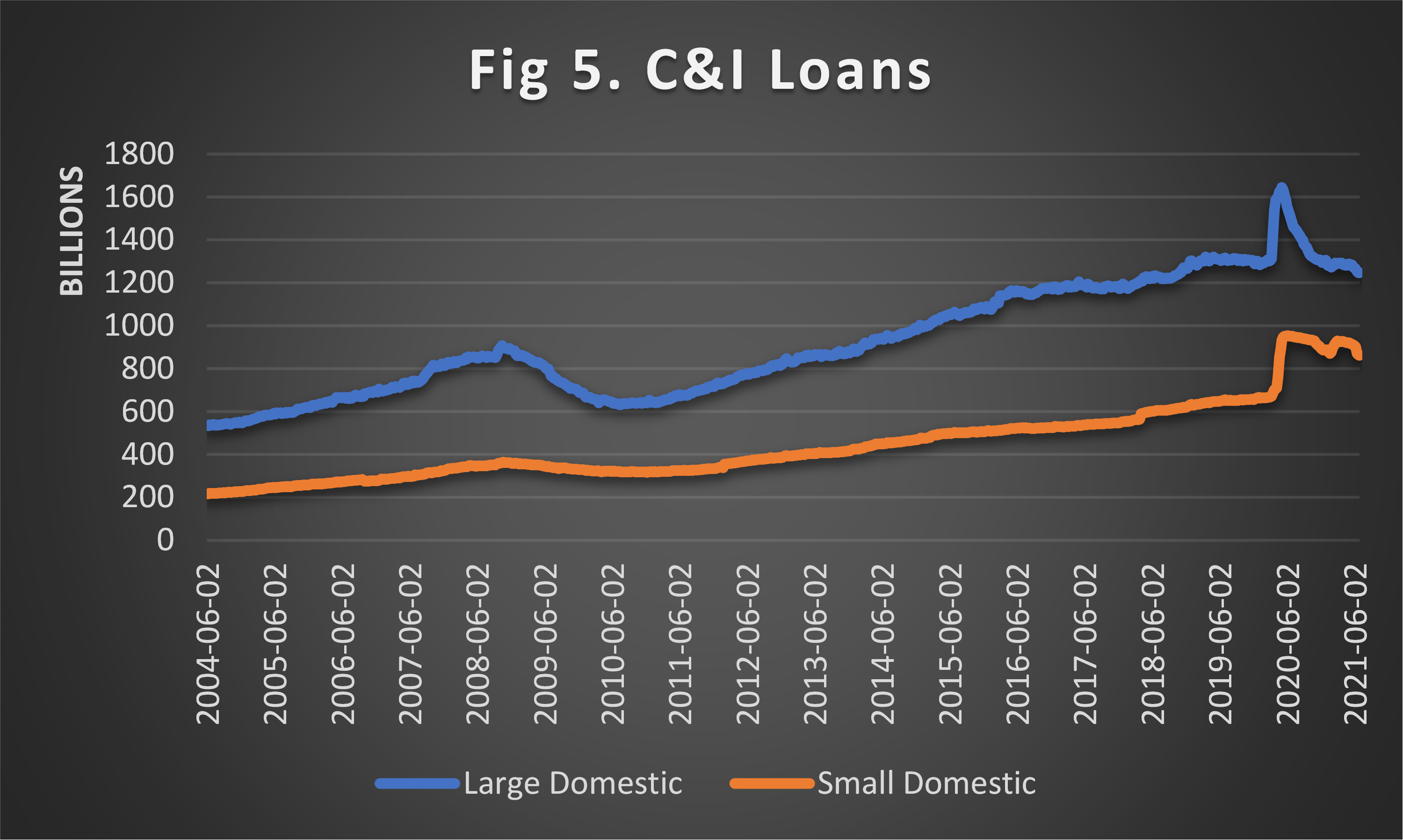 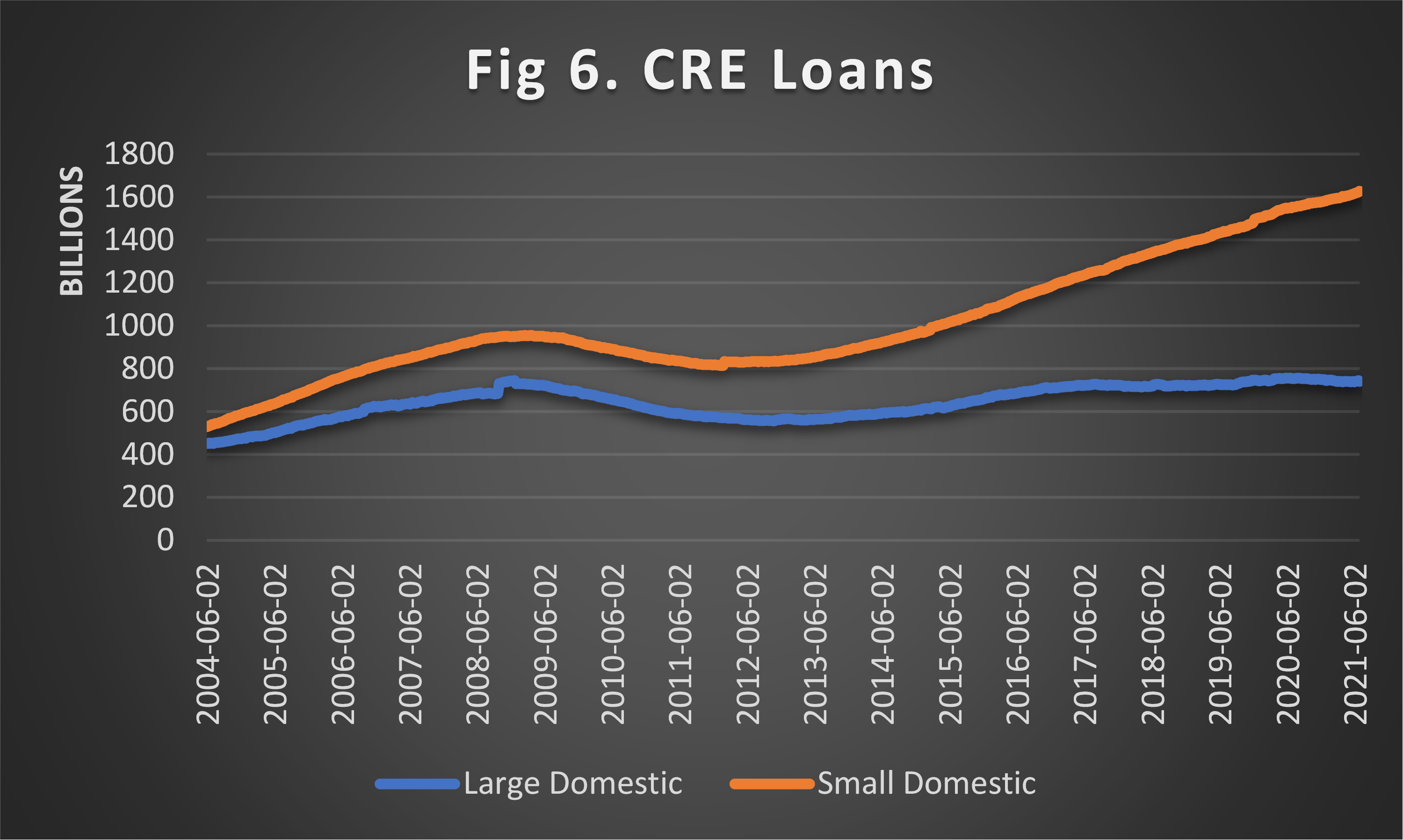 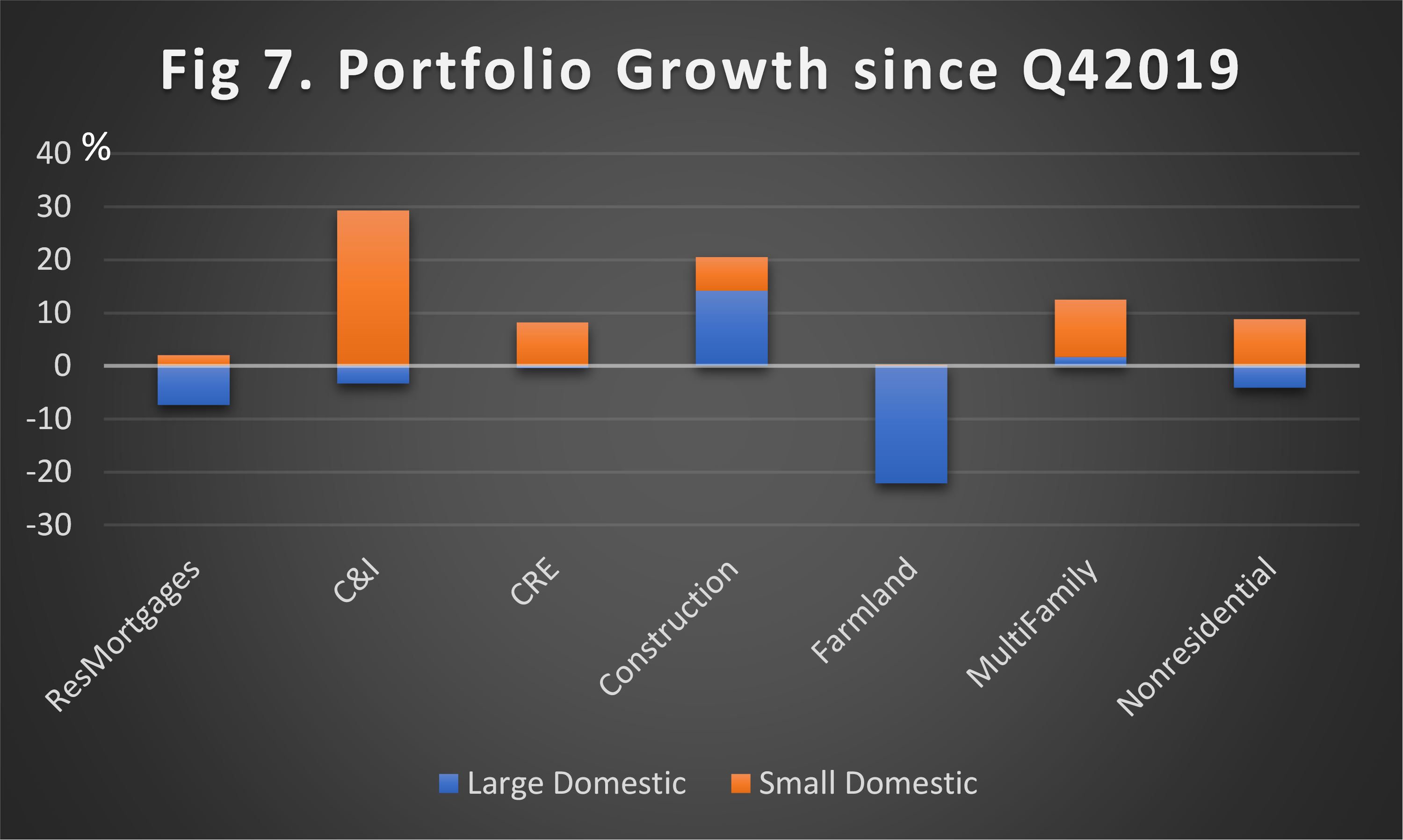 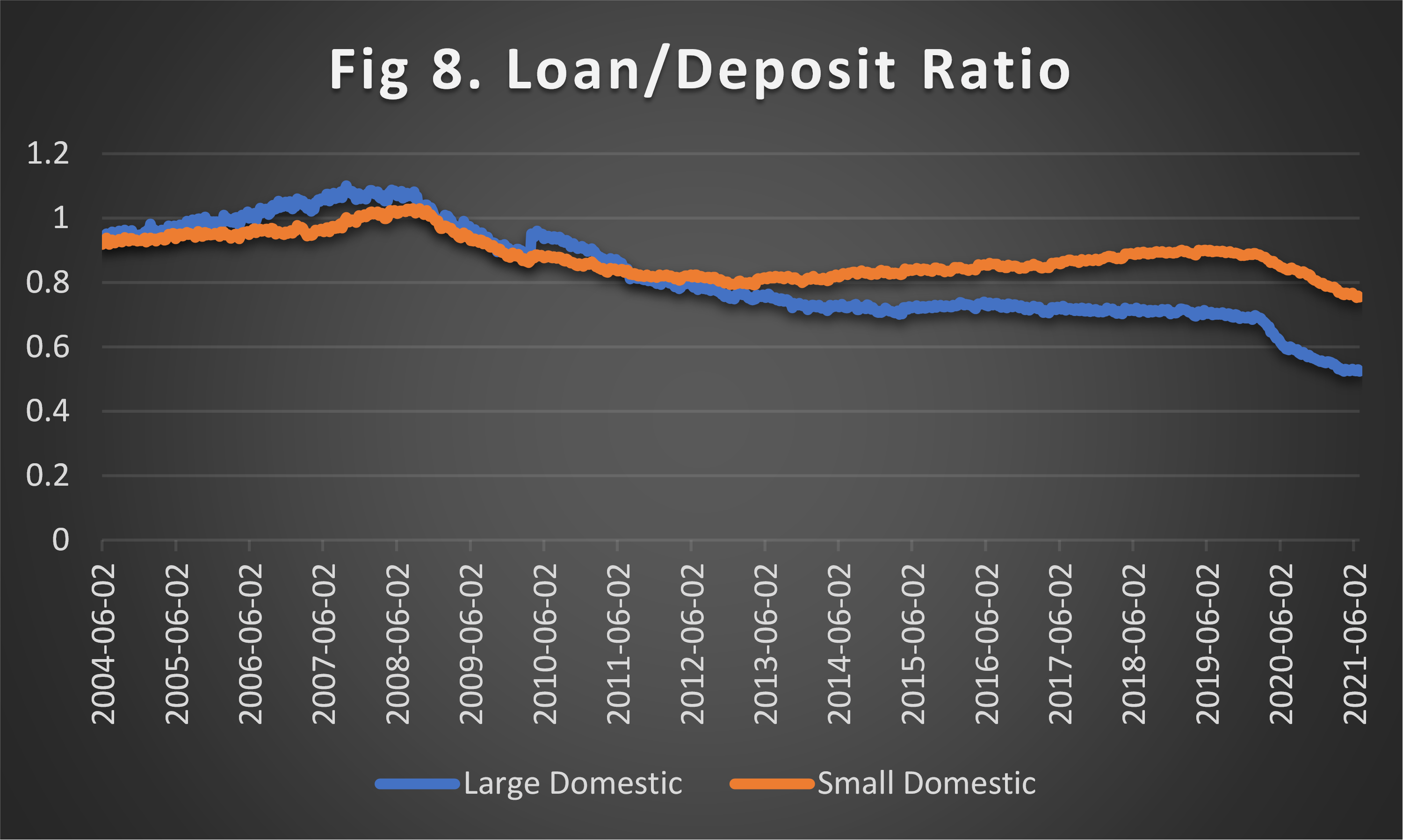