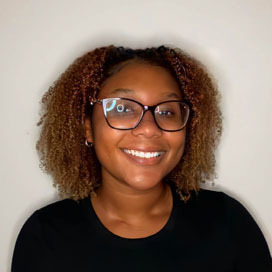 “The scholarship helped me not stress about paying for my tuition, because I have to pay out of pocket.”

RMA has awarded $152,000 in scholarships to students at Historically Black Colleges & Universities as part of its effort to advance diversity, equity, and inclusion in the financial services industry.

The $2,000 scholarships are designed to benefit students pursuing financial services careers—and the RMA member banks that will ultimately gain from their talents. “When I learned I was awarded the RMA Scholarship I was surprised and excited!” said Jenei Grogans, a junior at Norfolk State University. “The scholarship helped me not stress about paying for my tuition, because I have to pay out of pocket.”

The awards align with RMA’s belief that DEI is not only the right thing to do, it is also good business: Several studies show that banks with higher levels of racial, ethnic, and gender diversity exceed their peers in innovation, profitability, and other performance measures.

Grogans, of Roanoke, Virginia, said she is “pursuing a career in financial services because I feel like I can help people using the skills I am best at, which leans towards the financial industry.”

“These scholarships will help usher new talent into the industry at a critical time,” said RMA President and CEO Nancy Foster. “With the challenges presented by rapid technological transformation, climate, and demographic change, and ever-increasing emerging risks, the financial industry needs workforces with a diversity of talent and backgrounds to achieve its important mission.”

RMA is committed to supporting and promoting diversity, equity, and inclusion for the benefit of its members and the industry through efforts including its RMA Women in Risk initiative and RMA’s collaboration with MinBanc to provide training at MDIs.

RMA, which works to advance sound risk management principles in the financial services industry, awards scholarships through its RMA Foundation to assist in attracting banking talent at a time of increasing baby boomer retirements and competition for graduates from tech and other sectors.

The RMA Foundation has distributed more than $1.3 million to over 500 students. Applications are now being accepted for the next round of RMA Scholarships through March 31 at 4 p.m. Eastern Standard Time.

Devin Robinson Richmond VA University of the District of Columbia

Ruth Uche Lorman MS University of the District of Columbia